Every great business has a leader other than the ownership

Every great business has a leader other than the ownership. The greatest testament to a business has been has been the fact that its able to run on its own without the need of the owners. This is an incredible story and truly defines the need to have a proven leader is part of your team.

In this particular case it would have been a matter of life and death, without the instincts to take the reins naturally it could have been a catastrophic event results in the loss of all. I’m the first one to proudly raise my hand of being a control freak, but knowing when to let the rains go it’s the true definition of a leader and the confidence and their people taking care of business. Read this article in full more than once it truly is a business lesson Within A Life Lesson.

For more business building tips please visit robmlyon.com today where you can listen to episodes of our widly popular service without excuses podcast as well as many articles to help you grow your service firm. Also sign up for our email list you receive an ebook on how to position your service business better for today’s market. 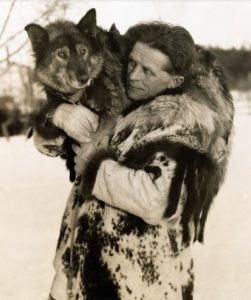 In 1925, diphtheria affected an isolated village in Alaska. Due to the severe cold, it was not possible to transport the medicines by plane and ship, so the transport of the medicines to the town of Noma was organized with the help of mushers (guides or drivers of a dog sled team).

About 1120 miles (1800 kilometers) had to be covered in five days. There were several teams and they took turns on different sections. The Norwegian Gunnar Kasen and his main dog Balto were the first to bring the serum to the village.

It turned out that Kasen had not made a mistake in choosing the main dog, because when the team had an accident, Balto helped his musher, saving him from certain death.

When the storm reached its peak and visibility became low they crossed 85 km. Balto is considered a hero, and in 1925 a monument was erected to him in Central Park in New York.

He was truly a hero, like all the other dogs during this mission. However, the dog that did the most difficult part of the work was Togo who crossed the longest distance 260 miles (418 kilometers). He was part of Leonardo Seppala team of dogs. Togo is the husky, in the photo.

Togo was already known for his incredible leadership qualities, which he demonstrated again in this race.

The mission was successfully completed and these brave dogs saved numerous lives.
Prev
Next

Give Me A Call Today!